For many years my grandfather operated an auto repair shop in Tucson, Arizona, “Barker Garage.”  Located on 6th Street, it still had the sign on the building back in 2010 when this picture was taken (found on Flickr).  My grandfather’s name was Howard Barker; he learned to work on cars in the first World War, according to my dad’s retelling.  A few years back my younger son had to interview a veteran for a school project, and my dad shared some photos of my grandfather’s service time in WWI.  My dad told us that my grandfather learned the trade of engine repair during the war.  He also fell in love with motorcycles; in fact, there is a family story that Grandpa Barker made his own motorcycle from spare parts!

My father told stories of working in his father’s garage as a teenager, and I remember him working on cars he owned while we were growing up.  During the 1960s he owned a series of sports cars, including an Aston Martin, a Lotus Elan (!), and eventually a ’70s Corvette T-Top.  When my dad owned his sports cars, I was too young to truly appreciate them, but I do remember riding in these cars at various times when we visited my Dad on weekends, and those memories bring back a smile.

Back in the day, my dad might take my sister and me to Volunteer Park in Seattle, and we’d park in front of the Seattle Art Museum.  Out front were two camel statues from China, which we nicknamed as we climbed on them.  (A long tradition existed of museum camel-climbing before conservators moved them indoors and provided climb-friendly replicas a few years back, as I discovered in this blog post from SAM.)  We called them “Yesterday” and “Tomorrow.”  My dad would park in one of the open spaces right in front of the museum, and we’d scamper off to the camels while he’d wax his car in the parking space.  One way to pass the time!

I never had the chance to visit my grandfather’s garage in Tucson, but I found an interior shot of the building from Flickr that was taken a few years back.  The photographer has noted that the equipment “must be 50-60 years old, still works fine,” and my thoughts are, what a wonderful family legacy, to think of our grandfather’s workplace still being intact in 2007 when the photo was taken, even though my grandfather had long retired, and he had passed away before the end of the 20th century.  There is something about seeing a palpable representation of one’s family history like this that really connects you to a sense of heritage and shared family feelings and accomplishments. 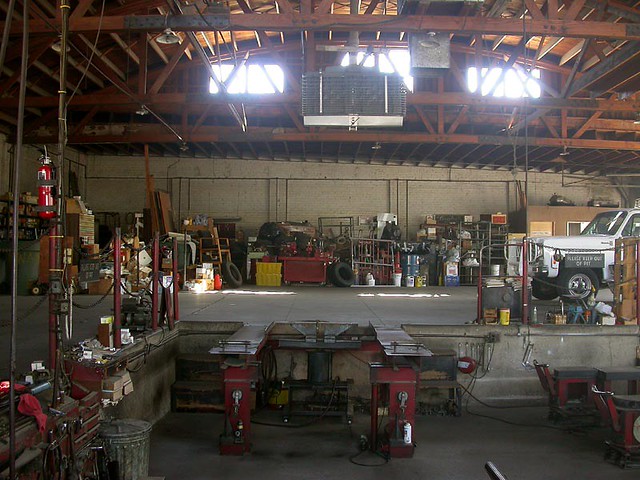 Photographer’s caption:  “This is an alignment pit. The cars are driven out onto the calibrated ramps, the front wheels onto the turntables. Nowadays, car alignments are computerized done with a lift. The equipment must be 50-60 years old, still works fine.” (Photo dated Jan. 2007)

Our family still reminisces about our time in Tucson, even though we’re spread across the country these days.  It’s hard to believe, but the building is still there, at least according to Google maps!  – Minus the “Barker Garage” sign.  135 East 6th Street

Does your family have traditional recollections?  Do you ever revisit a place you spent time at when you were young?

Science fiction writer and mathematician View all posts by TheresaBarker

What do you think? Cancel reply